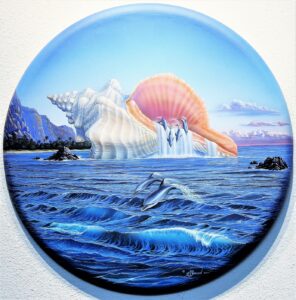 Kurt Burmann is one the most renowned and admired space and visionary artists. Born in Michigan in 1956, Kurt grew up in the rural country farmland of Michigan. It was there he became inspired as a self-taught painter. His career now spans over forty years as a professional artist.

He is known for his exquisite use of color with strict attention for detail and perspective. His unique blend of visionary, environmental and space art themes, combined with a metaphysical and spiritual flare, has earned him many top awards and international acclaim.

Kurt’s artwork have graced the covers and pages of many leading international magazines, several prestigious books, textbooks and children’s books, including: In The Streams of Stars, Visions of Space, and Isaac Asimov’s Library of the Universe. His art is reproduced on many popular fine art prints, canvas Giclee’s, posters, greeting cards, puzzles and numerous licensed products.

His original paintings have been exhibited throughout the U.S. and abroad in numerous solo and international group exhibitions, including: “The World Contemporary Art Exhibition” held in Los Angeles, CA., and the prestigious (IAAA-ASTC) “Other Worlds” international exhibition. 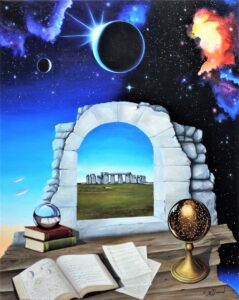 “The Equation” – Acrylic on Linen Canvas

He has produced many works for science centers, space centers and space museums, as well as background painting and set design for The Children’s Miracle Network Telethon. Often his visual appear in worldwide planetarium presentations and educational television programs.

Many of Kurt’s finest originals have been displayed in several of the most prominent museums, including The Smithsonian National Air and Space Museum, and are also represented in many outstanding private and corporate collections throughout the world.

Kurt and his wife Carol, of forty years have three grown children and five grandchildren. They have resided in Scottsdale Arizona for the past thirty years. In their time they enjoy being with family and friends, spending time with grandchildren and being close to God in the great outdoors fishing and camping. From his Scottsdale studio, Kurt continues to master a variety of subject themes and new genres, techniques, and evolving skillful ideas, perpetuating his career as an artist and his devoted passion for fine art painting.