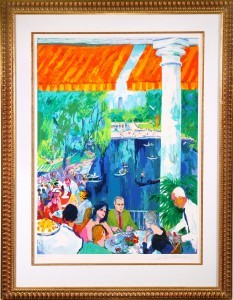 Says LeRoy Neiman, “Minutes from my studios are two of New York’s wonders. First, Central Park is a miraculous 800-acre oasis of glorious greenery amidst Manhattan’s congested towers of steel and concrete. Then, in the heart of the park is a small lake, on the bank of which sits a fine restaurant and alfresco dining experience. At a lakeside table at the Boat House Restaurant, one is transported into a world apart. Rowboats glide across the water. Waterfowl float along the surface or go diving for their own lunch. Turtles swim by the tables and gobble up bits of bread tossed by the charmed diners. The city’s skyline is in view, but the atmosphere is tranquil. Just the oasis Olmstead and Vaux intended.”

The lake was a popular boating spot long before Central Park was constructed around it. One of the park’s designers, Calvert Vaux, designed and built the first boat house in the 1870s, but by the 1950s, it had fallen into disrepair. Financier and philanthropist Carl M. Loeb donated most of the money required to demolish Vaux’s boat house and erect a new one, dedicated as the Loeb Boathouse in 1954 by legendary Parks Commissioner Robert Moses. Today, the well maintained boat house features the unique Boat House Restaurant as well as an informal café, event facility, and boat landing facilities.

In an earlier serigraph, Bethesda Fountain – Central Park, Neiman portrayed the Bethesda Fountain and plaza with the Boat House Restaurant off in the background. This serigraph reverses that view. In a masterpiece of composition and balance, the gold and orange awning across the top is balanced by the diners and waiters along the bottom. Completing the frame are the white architectural column along the right and the diners and boatyard along the left. The center is held by the deep blue water of the lake dotted with colorful boaters, including the Venetian gondola. In the background, behind Bethesda Fountain, the cityscape reminds diners that their bucolic surroundings are actually set in the world’s greatest city.

Neiman’s painting of the Boat House Restaurant joins his depictions of many other fine dining establishments including, in New York alone, Tavern on the Green, Le Cirque, Balthazar, The 21 Club, Café des Artists, Rao’s and P.J. Clarke’s.

The serigraph is released during festivities celebrating the 150th anniversary of the opening of Central Park. Print number one will be on permanent exhibition at the Boat House Restaurant.