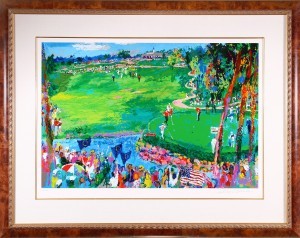 Move your mouse over imageSOLD

The Ryder Cup, spanning competitions over seven decades and held every two years, is one of the last great sporting events exemplifying prestige rather than prize money. Initially between the United States and the United Kingdom, European representation also includes players from Ireland, Italy, France, Spain, Germany, Denmark, and Sweden.

In this breathtaking panoramic view, LeRoy Neiman captures and captivates us with the verdant splendor of Louisville’s championship golf course Valhalla, with its rolling hills, still blue waters, and lush fairways. In the distance stands the steeple topped clubhouse overlooking the natural amphitheaters and the wide disbursement of the gallery with eight different balls in play. Spectators observe in hushed silence as they watch the intense concentration of players from two continents compete. Displaying their natíonal pride are America’s Stars & Stripes, while the navy bunting with a circle of stars represents the European Union flag. If one looks closely, Neiman can be seen situated near a tree in the foreground, sketching the excitement of the moment.

Valhalla was named for the great hall described in Norse mythology where the souls of Vikings feasted and celebrated with the gods. The artist, who has sketched many players at Valhalla, including Tiger Woods, says the famed course “has the feeling it was conceived for the majors.” As always, Neiman’s brilliant brush work translates the intense mental and physical stakes, where golfers and spectators know a mere putt or drive could mean the difference between winning and losing.