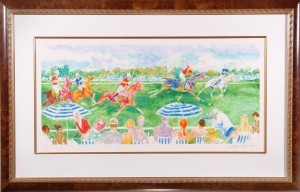 Neiman’s Polo Panorama reflects the growing popularity of one of the most ancient games dating back to the fifth century B.C. Polo was introduced to New York in 1876 by James Gordon Bennett an American publisher who first saw the game played in England where it arrived from India. Today the United States Polo Club reports player membership in over 250 clubs nation wide. Worldwide there are over 1000 polo clubs.

To quote the artist: “The Polo pony must combine lightning speed with the ability to stop or turn ‘on a sixpence'”. The strenuous rough-and-tumble croquet on horseback is played at full gallop for the entire game. A rich man’s sport, polo is played on expensive ponies before small genteel gatherings on emerald greens.” Neiman positions the viewer in a moment of the game that captures the essence of polo – the excitement of a possible goal as the forward is about to return the ball with the assistance of his teammates as they thunder down the field in an explosion of energy.

Become part of the action, feel the earth rumble as the Polo Ponies drive across the field chasing the ball after it cracks off the mallet. The rush of the game breezes by the elegant crowd dressed in the latest couture, as they sit coolly under umbrellas watching the feat while sipping champagne. Neiman’s Polo Panorama dramatically translates the excitement, action and ambiance of an afternoon polo match.