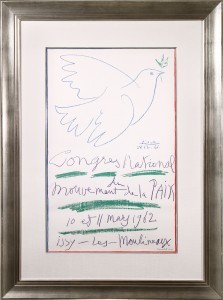 Move your mouse over image SOLD

Rodrigo 121
121 Congress National du Mouvement de la Paix
Site of Exhibition Issy-Les-Moulineaux. France.
Date of Exhibition 1962. March 10-11.
Publisher Le Mouvement De La Paix. Paris.
Printer Imprimerie Mourlot. Paris 1962.
Technique Photo-lithography In three colours.
Format
Print Run 8,000 copies. Copies were also made “avant la lettre”, some signed by Picasso in black pencil, which he donated to La Maison de la Pensee Française. One print run of 50 x 65 cm.
Classification Original poster designed by Picasso, using as subject the engraving The Blue Dove, done on December 28, 1961. There is also work “avant la lettre” in existence.
Reproductions The motif of this poster has been reproduced in the posters published for:
1) the exhibition held in the Galerie de la Colombe, Vallauris, in 1962.
2) the celebration of Picasso’s centenary by the consejo de cultura de la junta municipal del distrito de Tetuan, Madrid, on October 24, 1981.
3) the exhibition of posters from all over the world in favour of peace, organized by the Centre Culturel Municipal d’Argenteuil and the Galerie l’Art et la Paix among others, in Paris, in 1984.
4) the campaign by the community of Madrid to promote attendance at the city’s exhibitions and museums, in 1984.
5) the campaign against joining NATO organized in Spain in 1986.
Subject of Reference Doves.