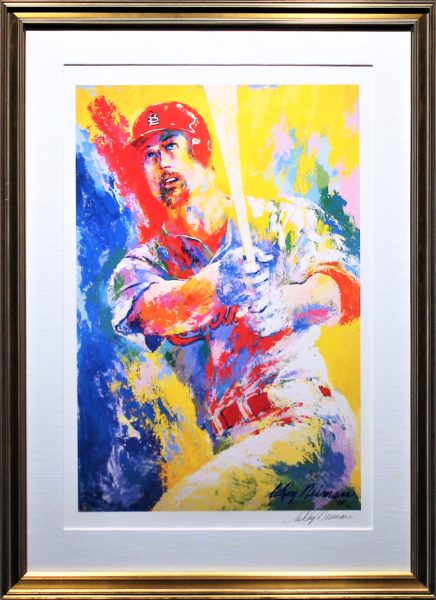 The print pays tribute to Mark McGwire of the St. Louis Cardinals, who hit 70 home runs in the 1998 baseball season, shattering the previous record of 60 held by the legendary Roger Maris. The sport of baseball has reaffirmed its place as America’s pastime, largely thanks to the home run-smashing Mark McGwire, portrayed here by LeRoy Neiman.

“When I decided to paint Mark McGwire, I intended to do a three feet by four feet painting, which is a proportion I tend to favor. Once into the work, I realized I couldn’t possibly contain a man of his majestic size and strength and accomplishment within that space. So I switched to four feet by six feet. I then chose to do a three-quarter-length space-filling figure, which bursts out of even that larger area.

“McGwire is shown just after clouting another home run. His massive chest, arms and hands fill the center of the image, and his sharp eyes are following the ball as it rockets out of the stadium. Reds and pinks convey his tremendous health and strength. The golden background is meant to suggest something of his character, which is so honest, generous, positive and confident.

“I did the painting over a period of time between his 55th and 70th home runs. Working on the painting while following his unbelievable progress every day in the newspapers and on TV was very different and exciting for me. I think that helped to make a print that is very energetic and powerful.”

With his portrait of Mark McGwire, LeRoy Neiman makes his own contribution to the legend of the man who has given so much to baseball.