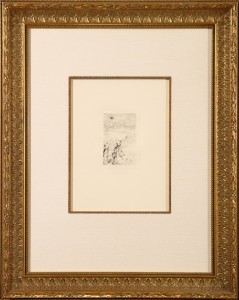 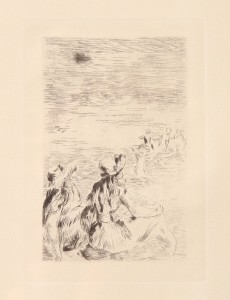 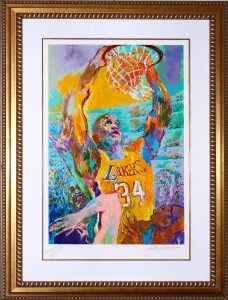 Playing center for the NBA Champion Los Angeles Lakers, at 7′ 1″ and 315 pounds Shaquille O’Neal is arguably the most dominating player in basketball today. Neiman’s Shaq is massive, focused and determined, dominating the serigraph just as he does the basketball court. Powering his way through a thicket of defending arms, he is about to slam the ball through the hoop on the way to winning the 2000 NBA Championship. The image glows with the gold from the Lakers’ uniforms and of course the gold of being an MVP.

Narrating his serigraph, the artist says “It’s like slo-mo, when No. 34 looms up, surging out of a crowd under the basket, a huge Moby Dick-like whale, ball in hand, players falling on all sides in his wake, like so much foam. After sinking the basket he hangs on the rim, then releases his 300+ pounds and floats gracefully, arms waving like a bird’s wings, to the floor. Shaq doesn’t run like so many big men who chug like they have sore feet. He is swift, supple and can with accuracy throw the ball the length of the floor to a teammate who is down under the basket. Shaq’s versatility makes fans expect more from the game’s big men.”

Shaq joins the exclusive ranks of basketball greats immortalized by LeRoy Neiman. Like Michael Jordan, the current king of the court, Shaq is a must!