Lithography (from Greek λίθος, lithos, “stone” and γράφειν, graphein, “to write”) is a method of printing originally based on the immiscibility of oil and water. Printing is from a stone (lithographic limestone) or a metal plate with a smooth surface. It was invented in 1796 by German author and actor Alois Senefelder as a cheap method of publishing theatrical works. Lithography can be used to print text or artwork onto paper or other suitable material.

Lithography originally used an image drawn with oil, fat, or wax onto the surface of a smooth, level lithographic limestone plate. The stone was treated with a mixture of acid and gum arabic, etching the portions of the stone which were not protected by the grease-based image. When the stone was subsequently moistened, these etched areas retained water; an oil-based ink could then be applied and would be repelled by the water, sticking only to the original drawing. The ink would finally be transferred to a blank paper sheet, producing a printed page. This traditional technique is still used in some fine art printmaking applications.

In modern lithography, the image is made of a polymer coating applied to a flexible aluminum plate. The image can be printed directly from the plate (the orientation of the image is reversed), or it can be offset, by transferring the image onto a flexible sheet (rubber) for printing and publication.

As a printing technology, lithography is different from intaglio printing (gravure), wherein a plate is either engraved, etched, or stippled to score cavities to contain the printing ink; and woodblock printing or letterpress printing, wherein ink is applied to the raised surfaces of letters or images. Today, most types of high-volume books and magazines, especially when illustrated in colour, are printed with offset lithography, which has become the most common form of printing technology since the 1960s. The word lithography also denotes photolithography, a microfabrication technique used in the microelectronics industry to make integrated circuits and microelectromechanical systems. 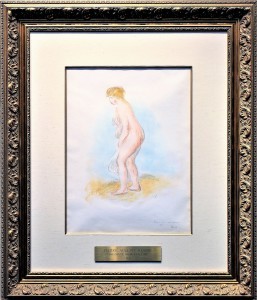 Best known for portraiture, figurative work, and his series of voluptuous bathing women, Pierre-Auguste Renoir was among the first group of French Impressionist painters. Renoir was celebrated in the early 20th century as one of the greatest modern French painters. In 1896 Renoir created this beauty “Baigneuse, Debout, En Pied”. With an edition of 100 impressions, several were done in black, but this one was printed in yellow, shades of pink, red, shades of blue & black. Totaling eight different shades. Framed beautifully with an engraved plaque with the words “Pierre-Auguste Renoir-Baigneuse, Debout, En Pied -1896. A “R” was signed in the stone. To check out the rest of our collection of Renoirs, click Here. 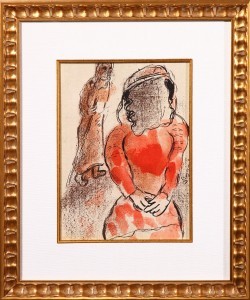 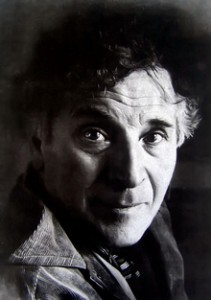