Move your mouse over imageTsukioka Yoshitoshi lived during a period of incredible turmoil and upheaval in Japan. After the forced opening of the country by a U.S. fleet, Japan underwent an often bloody transition from the classical Shogunate to modern Japan.

Yoshitoshi’s personal life was like an analogy of this difficult era. The struggle for survival in a new world and the constant fight between tradition and westernization characterized his life. Yoshitoshi prints represent the traditional Japanese values.

The artist is also referred to as Yoshitoshi Taiso. Taiso was his go from 1873 on – the name he used in his signature.

The given name of Yoshitoshi was Yonejiro. We do not know much about his youth. But all indications are, that it was not a very pleasant one. His father had taken a mistress and the boy was apparently unwanted. He was brought up by his uncle.

At the age of eleven, Yoshitoshi was enrolled as a student of the school of Utagawa Kuniyoshi, the great artist of ukiyo-e. One of his school classmates was Yoshiiku. Yoshiiku bullied the younger Yoshitoshi. The rivalry and hostility between both continued for the rest of their lives.

At the age of 14, Yoshitoshi composed his first woodblock print – a triptych of the naval battle of Dannoura in which the Minamoto clan destroyed the forces of the Taira clan in 1185. The same year, in 1853, U.S. Commodore Perry arrived with a fleet of battle ships and forced the opening of Japan to the West.

Kuniyoshi was like a father towards Yoshitoshi. After his master had passed away in 1861, hard times were ahead of the young student. He barely had enough commissions to survive.

The early 1860s were a period of great unrest and civil war-like skirmishes between proponents of the old Shogun government and their opponents who gathered around the emperor. During the Shogunate, that is since 1192, the Japanese Emperors had been powerless.

In addition to the political instability, a devastated economy made things worse for ordinary citizens. Japan was then in a deep recession, plagued by hyper-inflation and by crop failures.

In 1868, the last Shogun resigned after 2000 men of his troops were badly defeated by an imperial force in the bloody battle of Ueno. It was more of a massacre than a battle. The imperial soldiers were well-equipped with modern guns while their enemies fought with swords.

Yoshitoshi eye-witnessed this battle. Immediately afterwards, he composed many prints with extremely bloody and gruesome scenes – often with a black background. Certainly, these Yoshitoshi prints must be seen in connection with the events that took place in these years of upheaval. Besides, the publishing of ukiyo-e prints was always driven by the thrive for commercial success. And not much different from today’s tabloid press, themes with blood, sex and crime sold well.

With the Meiji Restoration, Yoshitoshi experienced a short period of modest commercial success followed by a sharp decline in commissions and bitter poverty. In the early 1870s, his problems with mental illness and depression erupted. Unable to work, he hardly produced any prints for two years.

In 1873, he recovered from his depressions and changed his name to Taiso, which means “great resurrection”. But in spite of new energies, his poverty continued. Yoshitoshi had to experience embarrassing moments. Okoto, his mistress sold herself to a brothel to raise money for Yoshitoshi’s support. Okoto shared the fate of many wives of impoverished former samurai who could not support their families. After the end of the Shogunate the privileges that this warrior class had enjoyed for centuries, were abolished.

In 1877, the political events changed Yoshitoshi’s life again. This time it was in his favor. An uprise of the samurai class came to its final climax. The samurai were lead by Saigo Takamori. After initial successes of the rebellion, the imperial troops pushed the rebels back to a hillside near Kagoshima. In the final battle, Sago Takamori and his last faithful followers committed suicide in samurai manner when their situation had become hopeless.

In the aftermath of this rebellion, there was a huge demand for illustrations of the events and Yoshitoshi was literally flooded with commissions.

In the 1880s, Yoshitoshi Taiso was finally financially settled. He moved into a huge house of his own and married a woman from the pleasure quarters. His school flourished. In 1882, he was employed by a newspaper. This gave him a steady income and marked the end of long years of poverty and sufferings.

Yoshitoshi’s reputation grew, and in spite of his bad health, he relentlessly composed a great number of prints. These years were Yoshitoshi’s most prolific ones – not only in terms of quantity, but also in terms of artistic quality. In 1985, the first designs of One Hundred Aspects of the Moon were published. This series was extremely popular. People waited in long lines to get one of the new Yoshitoshi prints. In 1888, the series 32 Aspects of Customs and Manners was published – a series of women prints. In 1889, a new series with ghost subjects came on the market: New Form of 36 Ghosts. Yoshitoshi Taiso firmly believed in the existence of ghosts. He was convinced of having experienced by himself some personal encounters with supernatural appearances.

The symptoms of mental illness became more and more frequent. Nevertheless, Yoshitoshi Tsukioka continued to work. He died on June 9, 1892 from a cerebral hermorrhage at the age of 53. 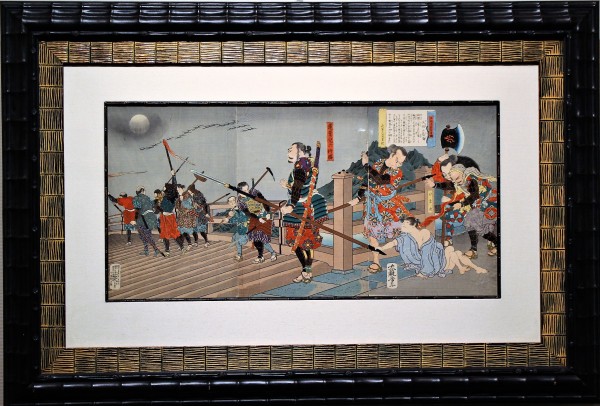