Berth Morisot was born on January 14, 1841 in Bourges, France. The daughter of a high-ranking government official and granddaughter of the influential Rococo painter Jean-Honoré Fragonard, Morisot began studying painting alongside her sister Edma when both were young. Though women were not allowed to join official arts institutions, like schools, until the last few years of the nineteenth century, Morisot and her sister earned a certain measure of respect within art circles for their budding talent.

After copying masterpieces from the Louvre Museum in the late 1850s under Joseph Guichard, Berthe and Edma began painting outdoor scenes while studying with the well known landscape painter Jean-Baptiste Camille Corot. Berthe Morisot worked with Corot, who became a family friend, from 1862 to 1868. She first exhibited her paintings at the prestigious state-run art show, the Salon, in 1864, and her work was shown there regularly for the next decade.

Morisot was greatly influenced by her friendship withÉdouard Manet, to whom she was introduced in 1868 by their fellow artist Henri Fantin-Latour. Though Morisot was never a pupil ofManet’s, she soon abandoned aspects of Corot’s teachings and destroyed almost all of her early work in favor of a more unconventional and modern approach, with the encouragement ofManet and others, including Edgar Degas and Frédéric Bazille. She also played an important role in Manet’s career, posing for a number of his paintings-notably The Balcony (1869) and Repose(c. 1870) – and encouraging him to adapt some tenets of Impressionism into his work.

Beginning in 1874, Morisot refused to show her work at the Salon, choosing to join a fledgling group of Impressionist painters that includedEdgar Degas, who would become Morisot’s lifelong friend, as well asCamille Pissarro, Pierre Auguste Renoir, Claude Monet, and Alfred Sisley. Morisot agreed to take part in the first independent exhibition of Impressionist paintings, which opened in a photographer’s studio on Paris’s Boulevard des Capucines in April 1874. In doing so, she went against the advice of Manet, who refused to exhibit with the Impressionists and was determined to make his name at the Salon. Among the paintings she showed at the exhibition were Le berceau (The Cradle), The Harbor at Cherbourg, Hide and Seek, and Reading.

In December 1874, at the age of 33, Morisot married Manet’s younger brother, Eugène, also a painter. Eugène Manet supported his wife in her work and the marriage gave Morisot social and financial stability while she continued her painting career. On a census form, Morisot famously recorded herself as “without profession,” underscoring her vision of her life and work within, not outside of, the traditional feminine sphere. She participated in all of the Impressionist exhibitions save one, in 1877, when she was pregnant with her daughter, Julie, born in 1878.

Morisot painted in oils, watercolors, and pastels, and produced numerous drawings. Her wide range of subjects included portraits (many of her sister Edma), landscapes, still lifes, and the domestic scene, particularly traditional feminine occupations. A particularly notable example of the latter was Woman at Her Toilette (c. 1879), which she displayed in the fifth Impressionist exhibition in 1880. For some of her later works, Morisot noticeably changed her style, making numerous sketches of a subject before beginning a painting rather than relying on spontaneous observation, as in her earlier work. Paintings that showcased her new style included The Cherry Tree (1891-92) and Girl with a Greyhound (1893).

Eugène Manet died in April 1892, after a long illness. Morisot’s friends and fellow artists rallied around her and her young daughter Julie, and she continued to work. Though never commercially successful during her lifetime, Morisot outsold several of her fellow Impressionists, including Monet, Renoir, and Sisley. She had her first solo exhibition in 1892 at the Boussod and Valadon gallery, where she sold a number of works, and she earned further recognition in 1894, when the French government purchased her oil painting Young Woman in a Ball Gown.

In the winter of 1894-95, Morisot contracted pneumonia. She died on March 2, 1895, at the age of 54. After her death, Renoir andDegas organized a retrospective of her work, which garnered serious critical acclaim and ensured her place in art history as one of the founding members of the revolutionary Impressionist movement 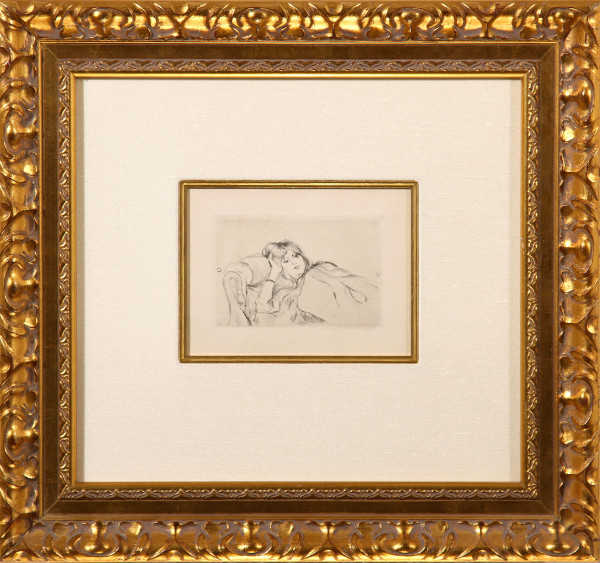