Du Gardier was a student Theobald Chartran of Jules-Elie Delaunay. Raoul du Gardier exhibited at the Salon of French Artists from 1894, and was awarded an honorable mention in 1897, and becomes a member from 1900 . Some of his works include the collection of Charles then Hayem, a friend of Gustave Moreau . He set up his studio at 12 boulevard du Montparnasse and earned distinctions as a painter and engraver. In 1897, during a trip to Algeria, where his family owns vineyards, he befriended the Belgian painter Henri Evenepoel.

A bronze medal was awarded to him the Universal Exposition of 1900 for his painting Women Kabyle . Like other alumni Gustave Moreau, he participated in the Salon d’Automne created in 1905 as a founding member of the Salon 5 and exhibits two portraits .

In 1914, he enlisted in the army and was a driver of General Foch and Marshal Franchet d’Esperey .

The end of the war marked his first commercial success. Raoul du Gardier worked for several magazines that publish his paintings and watercolors. In 1920 his brother, Pierre-Charles du Gardier was appointed Consul General of France. From 1920 to 1930, Raoul du Gardier began a series of trips in Egypt and the Indian Ocean.

In addition to Egypt, he also discovers the French colonies, the Algeria , the Morocco , Djibouti , the Lebanon , Mauritius, Reunion and the Comoros in particular. His orientalist painting is testament to the expansion of France in the world and provide him an important reputation and prosperity. He lived in Paris and led a worldly life. In the summer, he joined his brother Pierre-Charles, who has a large house in Pornic , along the coast. He set up a workshop in an outbuilding facing the sea where he produced numerous seascapes evoking the sweetness of life between the two world wars (boat trips in the bay Bourgneuf , elegant on the beach, children playing in the sea, luxurious ships, harbor scenes, …).

The outbreak of the Second World War marked the decline of his health. He is no longer able to move independently, or paint, his housekeeper, a victim of a traffic accident in Paris, is no longer able to attend to him. Greatly reduced, no income, he left his studio,in Paris and would stay in Pornic. His brother, Pierre-Charles would die in 1950.

Becoming ill, in 1952 he was placed in a hospital where he died Oct. 16, 1952. He is buried with his brother, in the cemetery of Sainte-Marie-sur-Mer, France 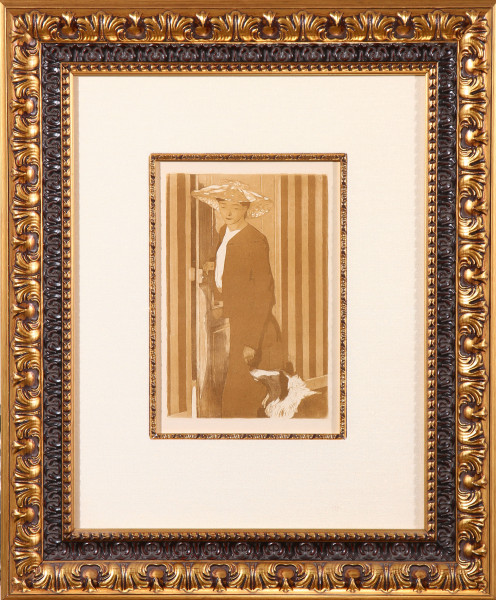