“…Mary Cassatt especially liked children, doting on her nieces and nephews and the offspring of friends. Naturalism and sensuality of a pure, elemental, and nonsexual sort are the hallmarks of Cassatt’s portrayals of childhood during the 1880s and 1890s. An example is Children on the Shore, which she showed at the last Impressionist exhibition in 1886. While this seaside subject is unique in her oeuvre, the close-up focus on the pair of toddlers and the firm draftsmanship are typical of the artist’s style in the 1880s. In his review of the exhibition, Gustave Geffroy commented on this painting: “[It] has the sharp outline that things and people have on the sand with the background of water and sky. The short arms and the dollish faces let you guess the flesh under a thick layer of suntan.” In the same review, Geffroy also responded to the sensuousness of Cassatt’s rendering of youngsters in Children in a Garden, likening them to “flowers in the heat.”

“The physicality in Cassatt’s work seems to have made some uncomfortable. Eloquently capturing a moment between rest and play, Portrait of a Little Girl portrays the daughter of friends of Degas in an interior with Cassatt’s dog. Cassatt submitted the painting to the American section of the 1878 Paris Exposition universelle: its rejection enraged her. The jury could have been affronted by the girl’s insouciant sprawl: she has flopped into the chair, looking hot, disheveled, exhausted, even bored. With her clothing pushed up to reveal her legs and petticoat and her left arm lifted and bent around her head, the young model can be perceived as totally unconscious and innocent or as coquettish and sexually precocious. Harriet Chessman argued that the girl’s pose derives from the traditional, erotic odalisque and thus was intended to foreshadow her adult sexuality. But in fact it seems that the attraction of this image lies in its naturalism. Children are less self-conscious than adults; they continually, rearrange their clothes and limbs and are often unaware of social conventions. Thus the work can be seen to reflect the then-current view of children as pure and unfettered beings. The jury may have objected to the artist’s radical handling of the background. As in her domestic interiors of the time, she reduced spatial depth by choosing a sharp, high angle for the floor, crowding the chairs together, and abruptly cropping the windows. Again, as in Children on Shore, the viewpoint from which the subject is observed is low and empathetic – the same level from which a child would see.

“…Cassatt had completely absorbed from her Impressionist colleagues Caillebotte, Degas, and Renoir, as well as her study of Japanese prints, the modern idea that the background of a painting might be as significant as the foreground. She understood that establishing a tension between the two would capture the immediacy of vision, as well as mimic or falsify by turns, the focal shifts of human sight and perception. Thus the space and the objects in Portrait of a Little Girl that surround the figure seem to be in motion; the floor lifts up, and the chairs appear to have slid into various, almost accidental positions, not unlike that of the young girl. These changing elements affect our perception of the painting’s psychological subtext: in contrast to [one] made clear by … direct, outward gaze, that of Cassatt’s “subject” is more complicated and elusive; the little girl’s sideways glance, which avoids ours, makes her independent of us. She is in a world of her own, one that adults could fully understand only by recapturing their childhood personae.” 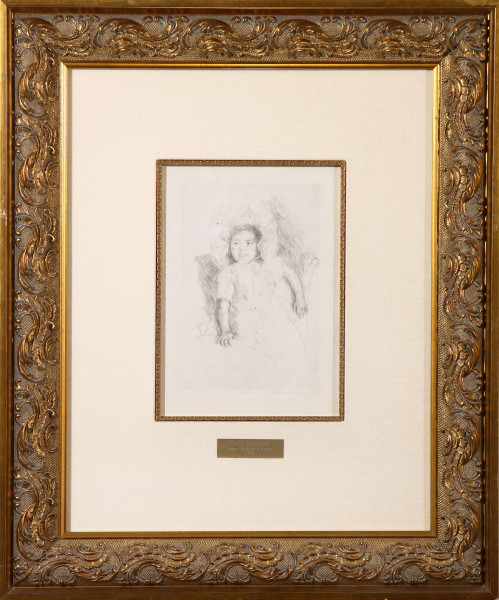 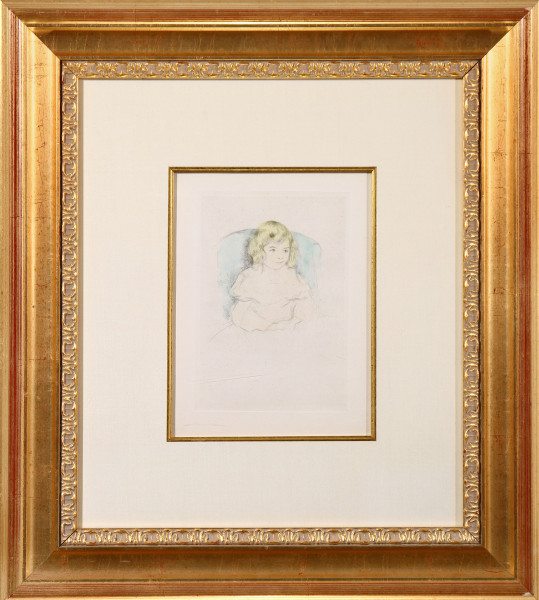