Guzmán Aymara’s love for art started the moment he was born. “It comes from my ancestors,” he says, “and from Puno,” known as the “capital folklórica del Perú” (“folkloric capital of Peru”). Other family members are involved in other types of art – his father played mandolin, and his brothers are also musicians – but Aymara is the only painter.

Aymara always liked art. As a child, he drew on stones using different colors of soil. “There was not even chalk,” Aymara recalls. He drew fish, manatees, and other animals. One drawing of a dog with many heads won him a dictionary, which introduced him to the many other cultures of the world.

Aymara went to elementary school in South Cantata, a colorful community near the shores of Lake Titicaca. From 1980 to 1991, he attended the Escuela de Bellas Artes, “Carlos Baca Flor” de Arequipa, Peru.

Evident in his work is the strong use of sunlight. “Perhaps my main characteristic is light,” Aymara says. “Without light, my work would have no life; would be flat and lifeless. The light in paintings is very important. I come from the [secondary] school in Arequipa [Peru], where normally there is sunlight all year round. The light and shades are very distinctive, and that is what I want to [capture] in my work. Light going through the vineyards; sun that outlines everything. I take advantage of all that, since birth when I saw the first light ’til now that I am living with that light.”

Guzman Aymara began painting as a child in his native Peru. He received his formal education at the Escuela de Bella Arts in Lima. He describes his painting style as: ” A reflection from the eyes to the brushstroke of the happiness and enthusiasm of a calm summers days.” The source of his art is the land itself. In roaming the Peruvian countryside for hours on end, he meticulously searches for the artistic inspiration and ideas that will be magically transformed onto canvas. The vibrant yet playful pallete used his art, for example, is reflected in the countless scenes of sun-soaked landscapes. Aymara says that he is ultimately ” a painter of light.” The constant and contrasting interplay of shades and light are characteristic of an Aymara painting. The paintings are best placed in the quiet spaces of homes and offices. Their tranquil nature, characterized by the mixture of thousands of shades of light, are conducive to reflection and quiet admiration. Moreover, his paintings display an incredible harmony that transcends the seeming disharmony of everyday life. Aymaras paintings offer the viewer something refreshingly different. The best works are the ones that convey all the colors, sights and sounds of the vibrant Peruvian landscape. It can be the sunlight over the vines; the dazzling light of an outdoor terrace; the sublime light of the late-afternoon sunset, for example, that give Aymaras work it’s superlative quality. Guzman Aymaras work is widely enjoyed and collected in North America and Europe. The accolades keep pouring in for this gentle Peruvian, who is steadily gaining in reputation as one of the eminent South American artists.

1994 – Second prize of the National Contest of Watercolor, “John Constable Prize” of the Consejo Britianico

1997 – Honorable distinction granted by the municipality of Arequipa CDL, VII anniversary of the foundation “Premios Nacionales 2000″ 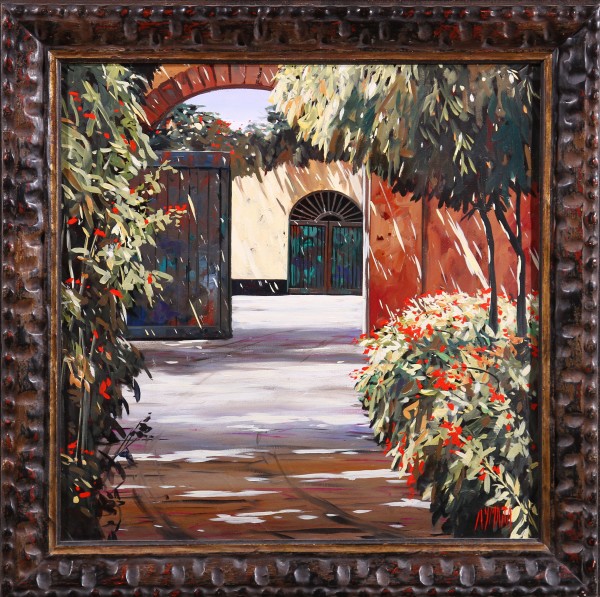