John Taylor Arms was an American etcher and draftsman – one of the most famous printmakers of the early 20th century. He is known for his medieval architectural etchings—he believed that Gothic architecture was man’s greatest achievement—and for his renderings of gargoyles and European churches.

Arms studied law at Princeton University and then transferred to the Massachusetts Institute of Technology to study architecture. He earned his Masters degree in 1912. In 1913, Arms made his first etching and by 1927, began exhibiting his architectural etchings at the National Arts Club and the Salmagundi Club in New York. He later devoted himself to etching and became noted for his excellent studies of medieval architecture.

During the 1920’s, 30’s and 40’s, the etchings and aquatints of John Taylor Arms provided the standard for other American architectural artists to follow. No artist, however, could match Arms’ superb technical skills and, to this day, his incredibly precise and detailed etchings raise feelings of astonishment.

Given the quality of his work, it is not surprising that John Taylor Arms trained first as an architectural draftsman before devoting himself to the art of etching. During the First World War, he served as an officer in the American navy. He published his first original etchings in 1919, following the end of the war. During the following decades, Arms spent almost as much time in England, France and Italy as he did in his native country. Arms’ lifelong passion was for Gothic architecture and thus Europe was the setting for much of his great art.

His technical expertise was without equal. Sometimes he employed the fine points of sewing needles to score the etching ground with precision and often rendered the finest shades and tones with the aid of a magnifying glass. Such innovations secured a fine international reputation for Arms. One author writes, “Arms’ images were handsome elaborations of an older tradition rendered with impressive technical mastery. These constant features sustained his reputation on both sides of the Atlantic which was buttressed by the knowledgeable praise of Campbell Dodgson, historian of the art and keeper of prints at the British Museum, and by the joint publishing of his etchings by Colnaghi & Company in London and by Kennedy & Company in New York.”

Arms illustrated his wife’s Churches of France and Hill Towns and Cities of Northern Italy. His fine technique and draftsmanship won him numerous awards, and his work is in many principal collections. Arms wrote an excellent Handbook of Print Making and Print Makers (1934).

John Taylor Arms was a full member of the Chicago Society of Etchers, the Print Society of England, the Canadian Painter Etchers, the Associe de la Societe des Beaux-Arts, Paris, and served as the first president of the Society of American Etchers. Examples of his original etchings and aquatints are included in the collections of most major museums, including the Congressional Library, Washington, the British Museum, London, and the Bilbiotheque Nationale, Paris. 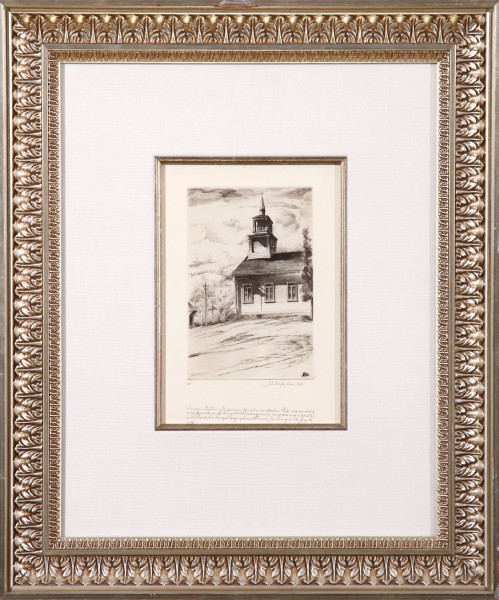